Vancouver, BC – June 27, 2019, Ethos Gold Corp. (“Ethos” or the “Company”) (TSXV:ECC) (OTCQB: ETHOF) is pleased to announce that it entered an agreement to earn up to a 70% interest in the Ligneris gold project (the “Ligneris Project”) from Société d'exploration minière Vior Inc. (“Vior”) (TSXV:VIO), subject to acceptance by the TSX Venture Exchange. The Ligneris Project is strategically located in the world class Abitibi greenstone belt which hosts numerous gold and base metal deposits and mines.

The qualified person has not verified the drilling data disclosed in this release, including sampling data and assays. These data come from historical reports made between 1984 and 1990 by Sigma Mines Ltd., Placer Dome Inc. and Vior. 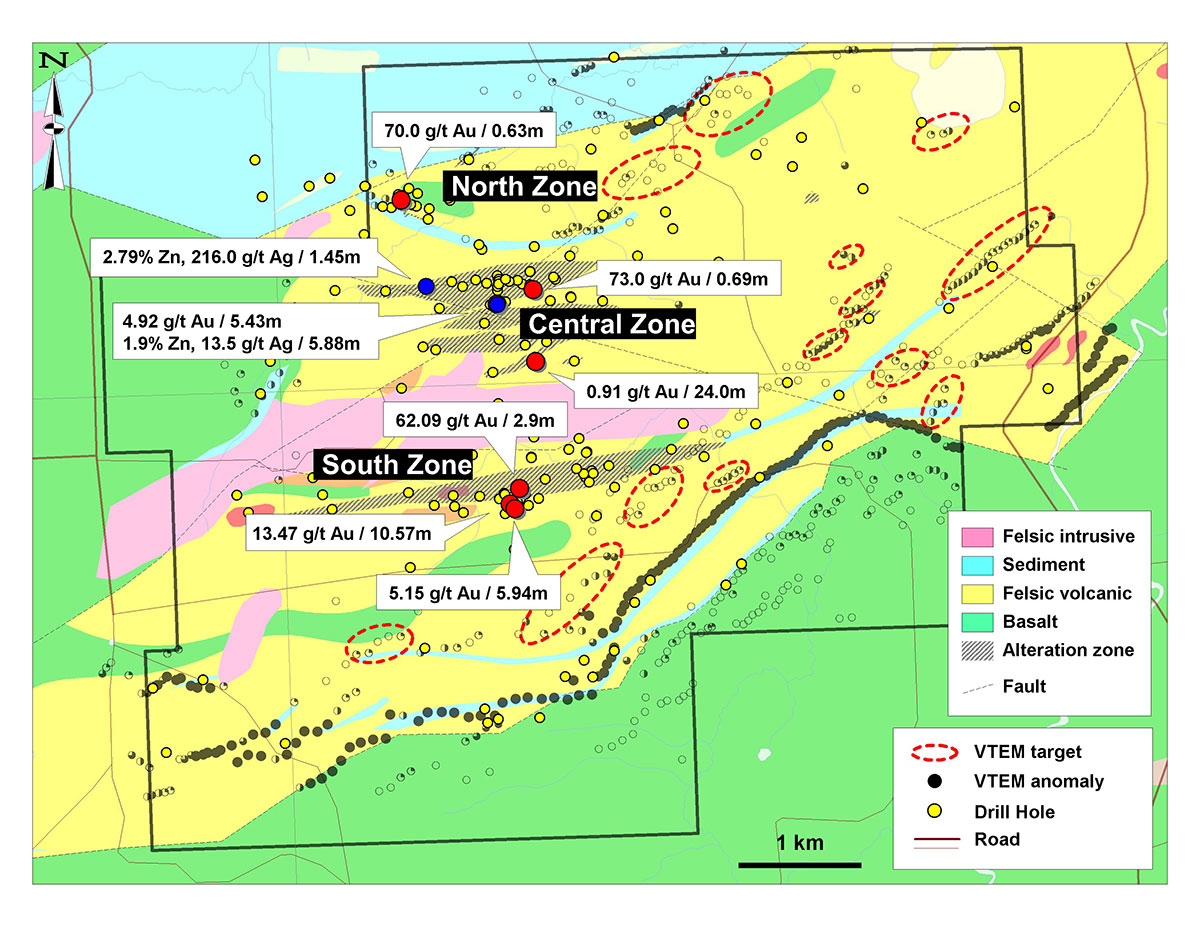 Stated Craig Roberts, P.Eng., President & CEO of Ethos, “Historic work at Lingeris has defined a large mineralized system including some significant intervals of gold and also zinc/silver in drilling.  Ligneris exhibits many similarities in geology and mineralization to Agnico’s LaRonde mine, approximately 80 km south.  LaRonde is now reaching mining depths of over 3000m.  Ligneris has very little historic drilling that penetrated below 300m depth.  A recent airborne survey at Ligneris has identified multiple geophysical targets at deeper levels.  Our plan is to refine these deeper targets with ground-based geophysics and to drill them before the end of 2019.  We have approximately C$1.4 million of unallocated flow through to spend in 2019 and we believe this is a great project to pursue with a portion of these funds.  The Vior team, led by their VP Exploration, Marc L’Heureux, P.Geo., M.A.Sc., will operate the program at Ligneris.  In addition to leading Vior’s recent work at Ligneris, Marc spent 4 years working at the Bosquet Mine, which is part of the LaRonde complex, so he has a deep understanding of the LaRonde type model.”

Ethos can earn a 51% interest in the Ligneris Project by paying Vior 1.0 million in Ethos shares and incurring C$3.0 million in expenditures over the first four years of the agreement, according to the following schedule:

Following earn in to 51% Ethos will have 60 days to elect to earn a further 19% interest (70% interest) by spending an additional C$4 million over the subsequent three years.

Jo Price, M.Sc., MBA, P.Geo., VP Exploration of the Company and a Qualified Person as defined under National Instrument 43-101 has reviewed and approved this release.

Ethos’ strategy is to earn into potentially large, drill ready gold projects that can be drill tested over a shorter time frame with a relatively modest budget.  Ethos’ current projects include:

Ligneris (earning up to 70% from Vior Inc: TSXV:VIO) is located 90 km north of Rouyn-Noranda, Quebec.  The project has a large mineralized surface expression, and approximately 200 holes drilled to approximately 300 m depth, with some significant gold drill intercepts.  The project rocks and mineralization bear many similarities to Agnico’s LaRonde complex.  Ethos plans to further define deeper targets with ground geophysics and to drill test these targets in 2019.

Perk-Rocky (earning 100%) is a large copper-gold porphyry target located 220 miles east of Williams Lake, British Columbia.  The 2019 exploration program including detailed airborne geophysics and ground sampling and mapping is commencing shortly. Subject to results Ethos may conduct some initial drilling at Perk-Rocky prior to the end of the 2019 season.

Ethos is also earning into the Pine Pass and Ursula vanadium projects (100% earn-in) in north-central British Columbia. In March 2019 Ethos received notice from the Province of British Columbia that the mineral tenures making up its Pine Pass vanadium project are included in an area under consideration for an immediate moratorium on development proposals and possible inclusion in an expanded environmental protected area, and Ethos is now waiting on the resolution of this issue before proceeding with further work.

This press release contains certain "forward-looking statements" within the meaning of Canadian securities legislation, including statements regarding the acceptance by the TSX Venture Exchange of the Company’s right to earn an interest in the Ligneris Project, the Company’s intention to acquire an interest in the Ligneris Project and planned exploration activities at the Ligneris Project. Although the Company believes that such statements are reasonable, it can give no assurance that such expectations will prove to be correct. Forward-looking statements are statements that are not historical facts; they are generally, but not always, identified by the words "expects," "plans," "anticipates," "believes," "intends," "estimates," "projects," "aims," "potential," "goal," "objective," "prospective," and similar expressions, or that events or conditions "will," "would," "may," "can," "could" or "should" occur, or are those statements, which, by their nature, refer to future events. The Company cautions that forward-looking statements are based on the beliefs, estimates and opinions of the Company's management on the date the statements are made and they involve a number of risks and uncertainties. Consequently, there can be no assurances that such statements will prove to be accurate and actual results and future events could differ materially from those anticipated in such statements. Except to the extent required by applicable securities laws and the policies of the TSX Venture Exchange, the Company undertakes no obligation to update these forward-looking statements if management's beliefs, estimates or opinions, or other factors, should change. Factors that could cause future results to differ materially from those anticipated in these forward-looking statements include the risk of accidents and other risks associated with mineral exploration operations, the risk that the Company will encounter unanticipated geological factors, or the possibility that the Company may not be able to secure permitting and other agency or governmental clearances, necessary to carry out the Company's exploration plans, and the risk of political uncertainties and regulatory or legal changes in the jurisdictions where the Company carries on its business that might interfere with the Company's business and prospects. The reader is urged to refer to the Company's reports, publicly available through the Canadian Securities Administrators' System for Electronic Document Analysis and Retrieval (SEDAR) at www.sedar.com for a more complete discussion of such risk factors and their potential effects