Ethos commences drilling a Carlin-type gold target at Iron Point, Nevada, and adds a fourth hole to test extension of target to the south

Vancouver, BC – June 18, 2019, Ethos Gold Corp. (“Ethos” or the “Company”) (TSXV:ECC) (OTCQB: ETHOF) is pleased to announce that it has commenced its maiden drill program at Iron Point, 22 miles east of Winnemucca, Nevada. The primary target is Carlin-type gold mineralization hosted in Lower Plate stratigraphy below the Roberts Mountain thrust fault.  The target is immediately west of a north-south striking range front fault at between 500m and 800m depth, and beneath a 5 km long north-south expression of Carlin-type gold pathfinder element geochemistry.

Stated Dr. Hennigh, “We have a robust drill plan prepared for testing the 5 km long gold target at Iron Point. Holes 1 and 2, both vertical, will test the central part of the target area by cutting through highly geochemically anomalous Upper Plate rocks in search of Carlin-style gold mineralization in Lower Plate rocks beneath. Hole 3 will test for similar mineralization in the northern part of the target area where an erosional window has cut down into the recumbent Zed-fold exposing targeted Lower Plate rocks.  Our newly added Hole 4, also vertical, is positioned in the southern part of the target area and will drill through basalt, gravel and Upper Plate rocks to test the underlying prospective Lower Plate stratigraphy. I am very happy to have this opportunity to test what is perhaps one of the best remaining Carlin-style gold targets left in Nevada.”

Stated Craig Roberts, P.Eng., President & CEO of Ethos, “Our deal with Victory was announced May 17 and we are very pleased to have advanced to the point of having a drill turning one month later.  The considerable historic exploration work at Iron Point, including multiple drill programs, has revealed strong gold and Carlin-type indicator element geochemistry over 5 km north-south along the range front fault, as well as significant drill intercepts of anomalous gold mineralization.   While the underlying Lower Plate rocks are highly prospective as a host for Carlin-type mineralization, to date Iron Point has not received any significant drilling to deeper levels to test for a Carlin-type gold target.  Our drill campaign will be the first to systematically test for a deeper Carlin-type target in the Lower Plate at Iron Point and the extensive historic work is of great benefit in targeting our deeper drilling.  Carlin-type targets have potential for significant size and  we are excited that our drill program is now underway.

With a maiden drill program also underway at our La Purisima gold project in Mexico, and with our initial exploration on the Perk-Rocky copper-gold porphyry project in British Columbia commencing shortly, we are looking forward to an active summer.  Additionally we anticipate that Ridgeline Minerals Corporation in which we hold an approximately 8% interest (through Carlin Type Holdings Ltd.) will begin its maiden drill program at its Carlin East project in the next several months, pursuing a deep, high grade Carlin-type target structurally on-trend from Newmont's Leeville-Turf mine and adjacent to Barrick’s Goldstrike complex on the Carlin Trend.”

Overview of the Iron Point Target

Iron Point is located at the intersection of the prolific Getchell and Cortez/Battle Mountain Trends: 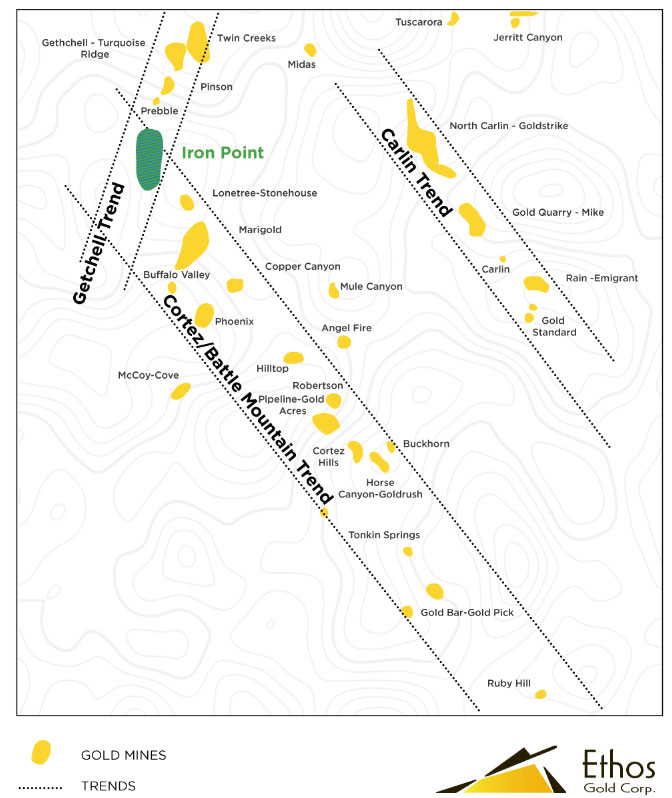 At Iron Point, Upper Plate Ordovician Vinini Formation overlies interpreted Lower Plate Silurian-Devonian Roberts Mountain and Popovich Formations, separated by the Roberts Mountain thrust fault dipping shallowly to the west (see Figures 2, 3 and 4 below).  North-south striking normal faulting subsequent to the Roberts Mountain thrust activity has down-dropped stratigraphy to the east forming a range front fault, infilled by alluvium and gravels to the east.  Some of the strongest Carlin-type gold pathfinder element geochemistry in Nevada is present at Iron Point in footwall rocks immediately west of the range front fault over an approximately 5 km strike distance (see Figure 5 below).  Anomalous gold mineralization in geochemical sampling and trenching coincident with this pathfinder geochemistry is also present along this 5 km trend.  Historic drilling at Iron Point has encountered multiple intervals of significantly anomalous gold mineralization in Upper Plate rocks and into Lower Plate stratigraphy also immediately west of the range front fault.  This includes an interval of Carlin-type gold mineralization along the range front fault interpreted to be smeared fault gouge transported from deeper levels.

Extension of Target Area to the South of Interstate 80

Previous mapping, sampling, and drilling along the extension of the range front fault south of Interstate 80 has also identified significant gold and pathfinder element anomalism. There has been no deep drilling in this area to date.  The target model here is similar to, and a continuation of, the target model north of the highway. Ethos has decided to test this target with a vertical hole (Hole 4) to a planned depth of 850m (see location on Figure 2), targeting Lower Plate stratigraphy beneath Upper Plate rocks. Since this area has already been permitted and bonded by Victory in preparation for drill testing the extent of vanadium mineralization in this area, drilling of the deeper gold target can commence immediately. 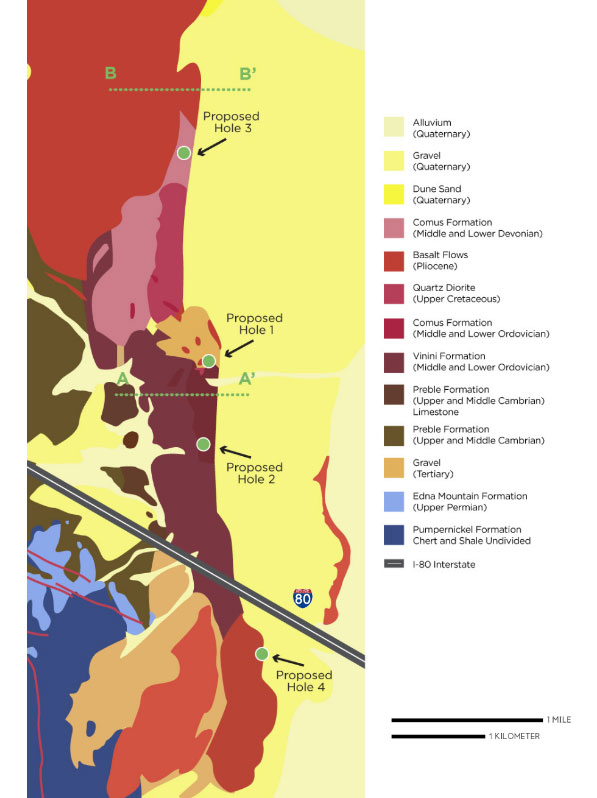 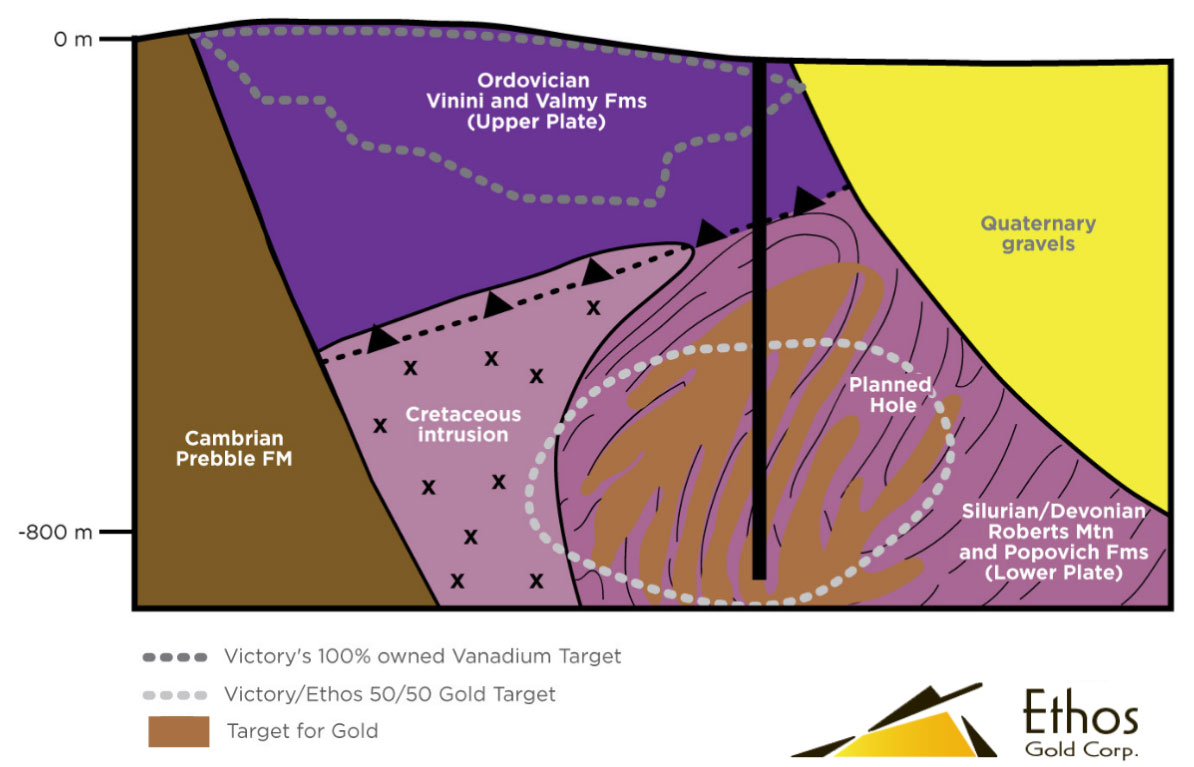 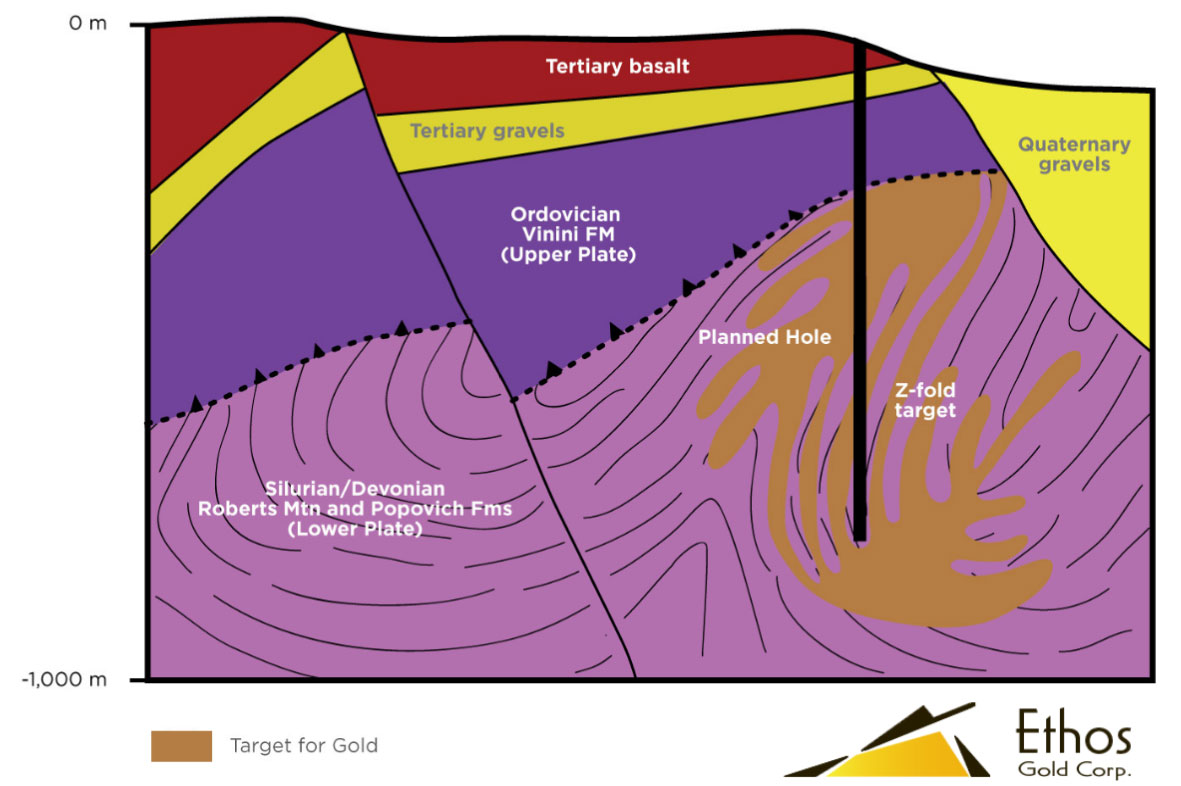 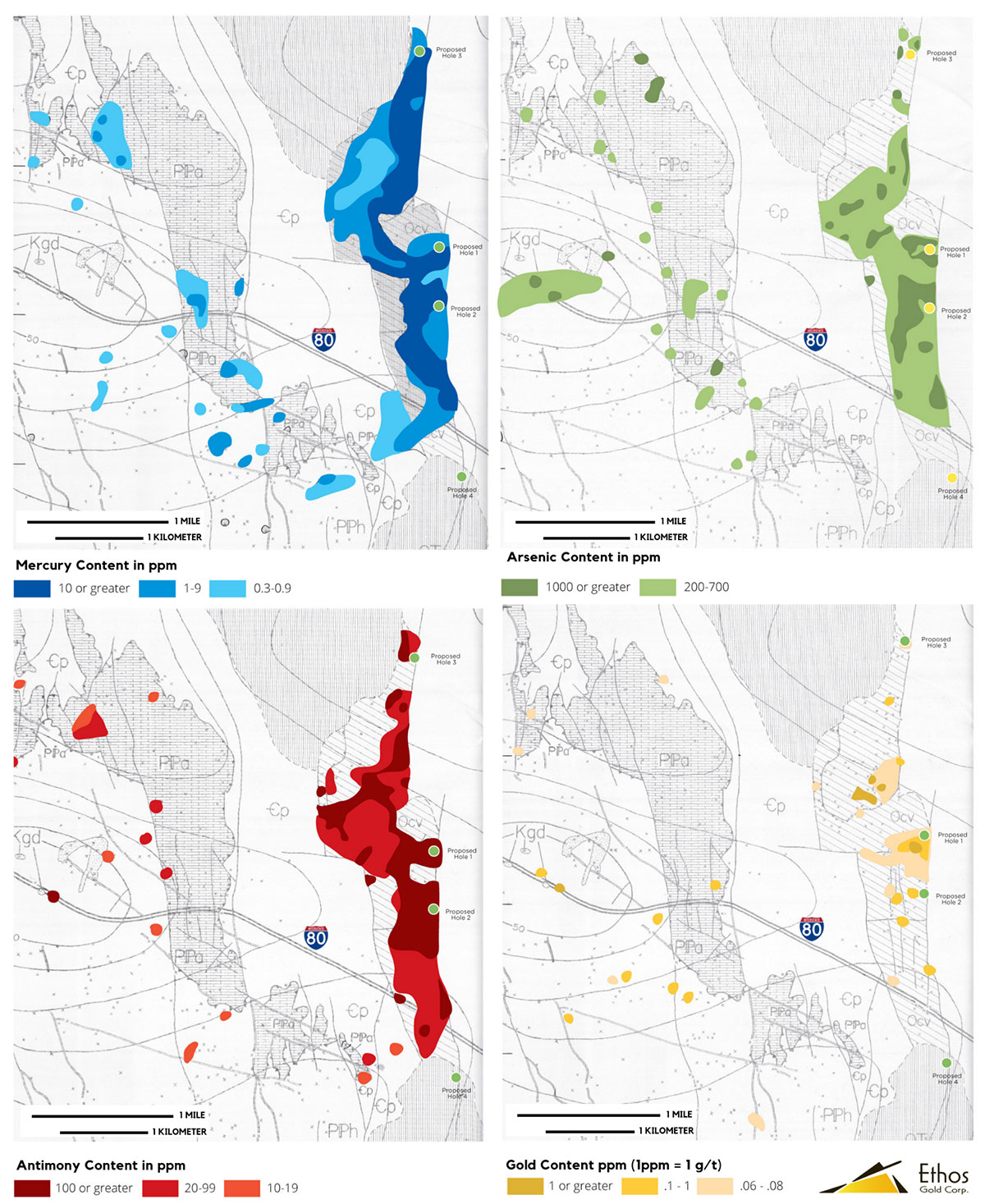 Ethos can earn a 50% interest in all precious metal rights at Iron Point by spending a minimum of C$5.0 million over three years, with minimum expenditures of C$1.0 million in the first year. Following the earn-in a 50-50 joint venture will be formed between Ethos and Victory.  Victory will maintain 100% title to the Iron Point claims and on completion of its earn-in Ethos would have a contractual right to 50% of any precious metal discovery. The vanadium mineralization is near surface with significant spatial separation from the conceptual deeper gold target. Victory maintains the right to ensure that any precious metal exploration and development plans do not interfere with development of its vanadium project.

Ethos Gold is exploring the La Purisima gold project (earning 100%) in Chihuahua Mexico, the Iron Point Carlin gold project (earning 50% from Victory Metals Inc: TSX-V: VMX) 22 miles east of Winnemucca, Nevada, and the Perk-Rocky copper-gold porphyry project (earning 100%), 220 km west of Williams Lake, British Columbia.  La Purisima is a near surface, bulk tonnage, oxide gold target, and a maiden drill program has recently commenced.  Iron Point is a Lower Plate hosted Carlin-style gold target, and a planned program of four holes to test this target is now underway under the supervision of Dr. Quinton Hennigh.  Perk-Rocky is a copper-gold porphyry target, and an exploration program including detailed airborne geophysics and ground mapping and sampling will commence shortly.  Ethos also owns approximately 8% of the equity of Carlin Type Holdings Ltd., a private British Columbia company whose wholly owned US subsidiary, Ridgeline Minerals Corporation, is earning into 100% ownership of three Nevada gold exploration projects, including two deep Carlin-type targets (Carlin East and Swift), at least one of which will be drill tested in 2019.

Ethos is also earning into the Pine Pass and Ursula vanadium projects (100% earn-in) in north-central British Columbia. In March 2019 Ethos received notice from the Province of British Columbia that the mineral tenures making up its Pine Pass vanadium project are included in an area under consideration for an immediate moratorium on development proposals and possible inclusion in an expanded environmental protected area, and Ethos is now waiting on the resolution of this issue before proceeding with further work.

This press release contains certain "forward-looking statements" within the meaning of Canadian securities legislation, including statements regarding the Company’s planned gold exploration program at Iron Point. Although the Company believes that such statements are reasonable, it can give no assurance that such expectations will prove to be correct. Forward-looking statements are statements that are not historical facts; they are generally, but not always, identified by the words "expects," "plans," "anticipates," "believes," "intends," "estimates," "projects," "aims," "potential," "goal," "objective," "prospective," and similar expressions, or that events or conditions "will," "would," "may," "can," "could" or "should" occur, or are those statements, which, by their nature, refer to future events. The Company cautions that Forward-looking statements are based on the beliefs, estimates and opinions of the Company's management on the date the statements are made and they involve a number of risks and uncertainties. Consequently, there can be no assurances that such statements will prove to be accurate and actual results and future events could differ materially from those anticipated in such statements. Except to the extent required by applicable securities laws and the policies of the TSX Venture Exchange, the Company undertakes no obligation to update these forward-looking statements if management's beliefs, estimates or opinions, or other factors, should change. Factors that could cause future results to differ materially from those anticipated in these forward-looking statements include the risk of accidents and other risks associated with mineral exploration operations, the risk that the Company will encounter unanticipated geological factors, or the possibility that the Company may not be able to secure permitting and other agency or governmental clearances, necessary to carry out the Company's exploration plans, and the risk of political uncertainties and regulatory or legal changes in the jurisdictions where the Company carries on its business that might interfere with the Company's business and prospects. The reader is urged to refer to the Company's reports, publicly available through the Canadian Securities Administrators' System for Electronic Document Analysis and Retrieval (SEDAR) at www.sedar.com for a more complete discussion of such risk factors and their potential effects