Vancouver, British Columbia: FIREWEED ZINC LTD. (“Fireweed” or the “Company”) (TSXV: FWZ) is pleased to announce that the first field crews have been mobilized to the Macmillan Pass Zinc Project in Yukon, Canada.

The first tasks will be construction of drill sites on the first target area at Tom North and general preparation of the camp, facilities and equipment for the summer exploration program. Drilling and other field work are expected to begin within seven days.

Highlights for the 2019 Exploration Program

CEO Statement
Fireweed CEO Brandon Macdonald stated “I am very excited about our 2019 exploration program. We have step out holes planned to expand on our current resources, which are already among the largest undeveloped zinc resources in the world, and we have a number of excellent greenfield targets generated last year that we will drill this summer in search of new discoveries to further grow the project. In the past two years of exploration at Macmillan Pass, we have consistently added high-grade drilling results every year. We anticipate the 2019 campaign will have continued success and look forward to seeing the results.”

2019 Core Drilling Program
To prevent delays at the start of the program, a small crew flew to site in May to check supplies and test machinery including a bulldozer and core drill that had been left in camp over winter. Numerous greenfield drill targets identified last year through geophysics, geochemistry and geological mapping are designated for drill testing this summer, as well as step-out holes on known deposits (Map 1; see Fireweed news release dated May 21, 2019 for details).

Tom North Drill Target
The first target to be core drilled this summer will be Tom North. Interpretation of historic drilling and trenching results immediately north of the Tom West deposit led to the delineation of a new step-out drill target with large upside potential: Tom North. Six shallow holes drilled at Tom North in 1951-52 plus one additional hole in 1978 returned assays up to 5.05% zinc and 1.80% lead over 19.9 m (see other drill results on Figure 2)1. Fireweed drilling elsewhere at Tom demonstrated that many early historic drill results under-reported grades due to poor core recoveries with small-diameter historic core. Drilling with modern large-diameter core at Tom West in 2017 and 2018 improved core recoveries and improved grades (see examples in 2017 and 2018 Fireweed drilling news releases). Mapping and 2018 exploration data suggest that Tom North may be an extension of Tom West separated by a fault. The Tom North target has been traced in sparse historic drill holes and trenches over a strike length of 600 m and only to shallow depths of about 50 m. Fireweed plans to drill the continuation of Tom North at depth to test its potential for mineralization amenable to open-pit mining and to test for thicker
mineralization similar to the adjacent Tom West Zone. Tom North was not included in the current mineral resource estimate for the property (described in Fireweed news release dated January 10, 2018) and represents potential for a significant expansion to the Tom mineral resources.

Tom East Expansion Target
After Tom North, the core drill will test the depth extension of Tom East. Tom East is one of the highest grade zones on the property. In 2018, drilling extended the zone to depth with the deepest hole intersecting a high grade interval of 16.4 m grading 21.14% zinc, 13.55% lead and 243 g/t silver
(Figure 3; see Fireweed news release dated September 20, 2018 for details). The zone remains open for expansion.

2019 RC Drilling Program
New this year, Fireweed will employ an innovative small reverse circulation (RC) drill with a minimal environmental impact to rapidly carry out initial tests at low cost on as many greenfield targets as possible. The RC drill will test each target with a series of short holes recovering samples from overburden and short bedrock intervals. RC samples will be analysed in the field for zinc, lead, silver and other elements with a portable X-ray Florescence (pXRF) analyser allowing for immediate follow up of results. The RC drill results will then be used to rank targets for drilling with the larger conventional core
drill.

The RC drill will begin drilling at Jason North and then move west to test newly defined targets along the Fertile Corridor (see Fireweed news release dated May 21, 2019 for details).

Jason North Target
Jason North is a new untested drill target located immediately north of the Jason Main deposit. It was defined through re-interpretation of historic data and confirmed by soil sampling in 2018. Jason Main and Jason South are interpreted to be the same deposit connected by a syncline fold at depth (Figure 4). A second zone with high grade historic drill intersections, Lower Jason South, occurs 20-30 m below the Jason South zone and may similarly project around the syncline fold to a location north of Jason Main: Jason North. The Jason North area is marked by a strong lead-in-soil anomaly2, a strong basal overburden historic RC drill lead-in-soil anomaly2, and a strong, double-peaked geophysical electromagnetic conductor anomaly consistent with a steeply-dipping conductive mineralized body. Despite its location close to the Jason Main deposit, Jason North has never been drilled before.

2019 Field Exploration Plans
Test gravity surveys in 2018 showed prominent anomalies over the Tom and Jason deposits, and demonstrated that properly controlled and corrected ground gravity surveys are an effective tool to detect zinc mineralization on the property. Geophysical plans for 2019 include extending gravity surveying west along the Fertile Corridor, completion of the gravity grid in the Target S area south of Jason and additional gravity surveying in the Tom deposits area (see Map 1). An airborne LiDAR topographic survey of the entire property will be completed in 2019 to improve corrections applied to gravity data for exploration and new target definition as well as aid engineering and environmental studies.

Continued soil geochemical surveys are planned for select areas of the property and extensive geological mapping will be carried out this summer to advance Fireweed’s understanding of the geological controls on mineralization and further delineate prospective areas. Technical information in this news release has been reviewed and approved by Gilles Dessureau, P.Geo, Vice President, Exploration and a ‘Qualified Person’ as defined under Canadian National Instrument 43101.

About Fireweed Zinc Ltd. (TSXV: FWZ): Fireweed Zinc is a public mineral exploration company focused on zinc and managed by a veteran team of mining industry professionals. The Company is advancing its district-scale 544 km2 Macmillan Pass Project in Yukon, Canada, which is host to the 100% owned Tom and Jason zinc-lead-silver deposits with current Mineral Resources and a PEA economic study (see Fireweed news releases dated January 10, 2018, and May 23, 2018, respectively, and reports filed on www.sedar.com for details) as well as the Boundary Zone and End Zone which have significant zinc-lead-silver mineralization drilled but not yet classified as mineral resources. The project also includes option agreements on large blocks of adjacent claims (MAC, MC, MP, Jerry, BR and NS) which
cover exploration targets in the district where previous and recent work identified zinc, lead and silver prospects, and geophysical and geochemical anomalies in prospective host geology.

Additional information about Fireweed Zinc and its Macmillan Pass Zinc Project can be found on the Company’s website at www.FireweedZinc.com and at www.sedar.com.

Cautionary Statements
This news release may contain “forward-looking” statements and information relating to the Company and the Macmillan Pass Project that are based on the beliefs of Company management, as well as assumptions made by and information currently available to Company management. Such statements reflect the current risks, uncertainties and assumptions related to certain factors including but not limited to, without limitations, exploration and development risks, expenditure and financing requirements, general economic conditions, changes in financial markets, the ability to properly and efficiently staff the Company's operations, the sufficiency of working capital and funding for continued operations, title matters, First Nations relations, operating hazards, political and economic factors, competitive factors, metal prices, relationships with vendors and strategic partners, governmental regulations and oversight, permitting, seasonality and weather, technological change, industry practices, and one-time events. Additional risks are set out in the Company’s prospectus dated May 9, 2017, and filed under the Company’s profile on SEDAR at www.sedar.com. Should any one or more risks or uncertainties materialize or change, or should any underlying assumptions prove incorrect, actual results and forward-looking statements may vary materially from those described herein. The Company does not undertake to update forward?looking statements or forward?looking information, except as required by law.

Footnotes:
1Historic drill results for Tom North reported in this news release are taken from historic reports prepared by previous operators. Neither the Company or the Qualified Person has done sufficient work to verify these results and therefore these results should not be relied upon. The Company is including them for information purposes only to explain the basis for the exploration target and plans for additional drilling.

2 Exploration using soil geochemistry in the Macmillan Pass area focuses more on lead-in-soil anomalies rather than zinc-in-soil anomalies because zinc is more mobile in the surface soils and as such its occurrence is widespread and not necessarily indicative of nearby mineralization, whereas lead is less mobile and is more typically detected in elevated amounts closer to bedrock mineralization. 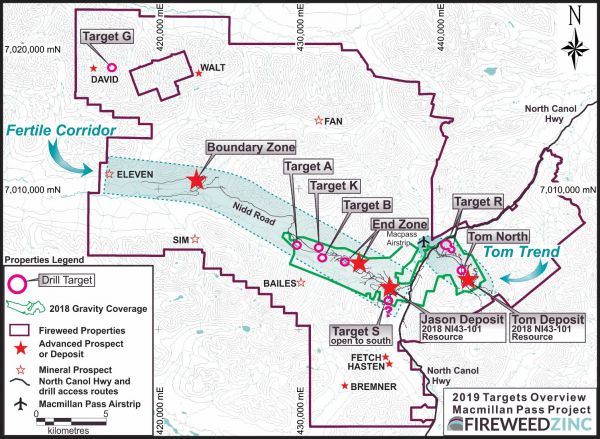 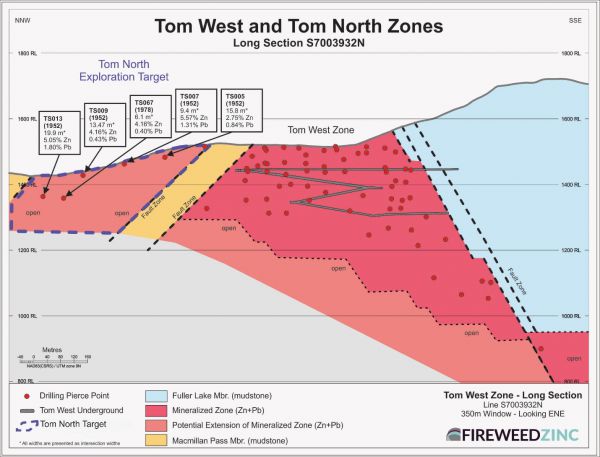 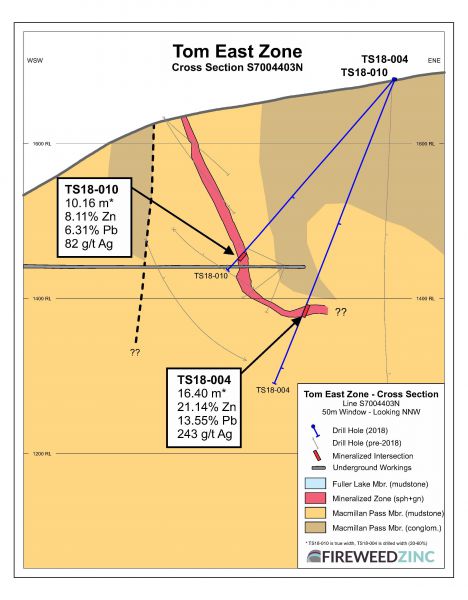 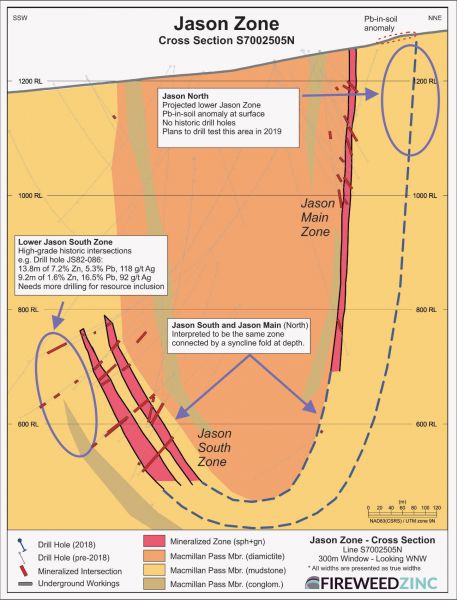