Vancouver, BC – May 22, 2019, Ethos Gold Corp. (“Ethos” or the “Company”) (TSXV:ECC) (OTCQB: ETHOF) is pleased to announce trench results at its La Purisima gold project in north-west Chihuahua State, Mexico.  Ethos has completed six mechanical trenches (T1-T6) totaling a length of approximately 3.0 km that targeted the surface expression of the Purisima Vein Zone and the parallel Stockwork Zone (see figure below).

The mineralized zones are situated in a valley about 500 metres wide.  Dozer cuts through shallow alluvium exposed well mineralized rocks in trenches across the northern flank of the valley.  A portion of the valley was not trenched due to deeper alluvium that would have required larger equipment and additional safety measures.  The trenches were oriented North 60 East, generally perpendicular to the northwest trending mineralized zones, and covered approximately 1700 metres of strike distance on these zones.

A total of 1000 trench samples were collected in the six trenches, with sample lengths ranging from 2 to 6 metres. Assays results range from below detection to 6.83 g/t Au.  In aggregate (not continuous), 155m of the sampling in T1 and 173m of sampling in T2 were above 0.1 g/t Au, indicating the broad dissemination of gold mineralization.  The gold mineralization is coincident with anomalous indicator elements including antimony, barium, and arsenic, and the Company is in the process of completing detailed geochemical mapping of various indicator elements.  The trenching results will be utilized to guide the next phase of exploration including the upcoming drill program comprising approximately 15 RC holes.  In addition, particularly encouraging new high-grade trench results in the Stockwork Zone will be the focus of further work in the upcoming phase of exploration.

Commented Craig Roberts, P.Eng., President and CEO of Ethos: “We are very encouraged by the trench results that show dissemination of gold mineralization over significant intervals outside of the primary veins in the Purisima Vein Zone, and also by the new high-grade intervals identified in the Stockwork Zone.  We will use these results to plan our fully permitted maiden drill program of approximately 15 RC holes which we intend to commence shortly.  In part because of the excellent access and infrastructure our preliminary budget for this drill program is modest, approximately $Cdn 350,000 (currently being finalized).  We are looking forward to drill testing this very prospective near surface, bulk tonnage target.” 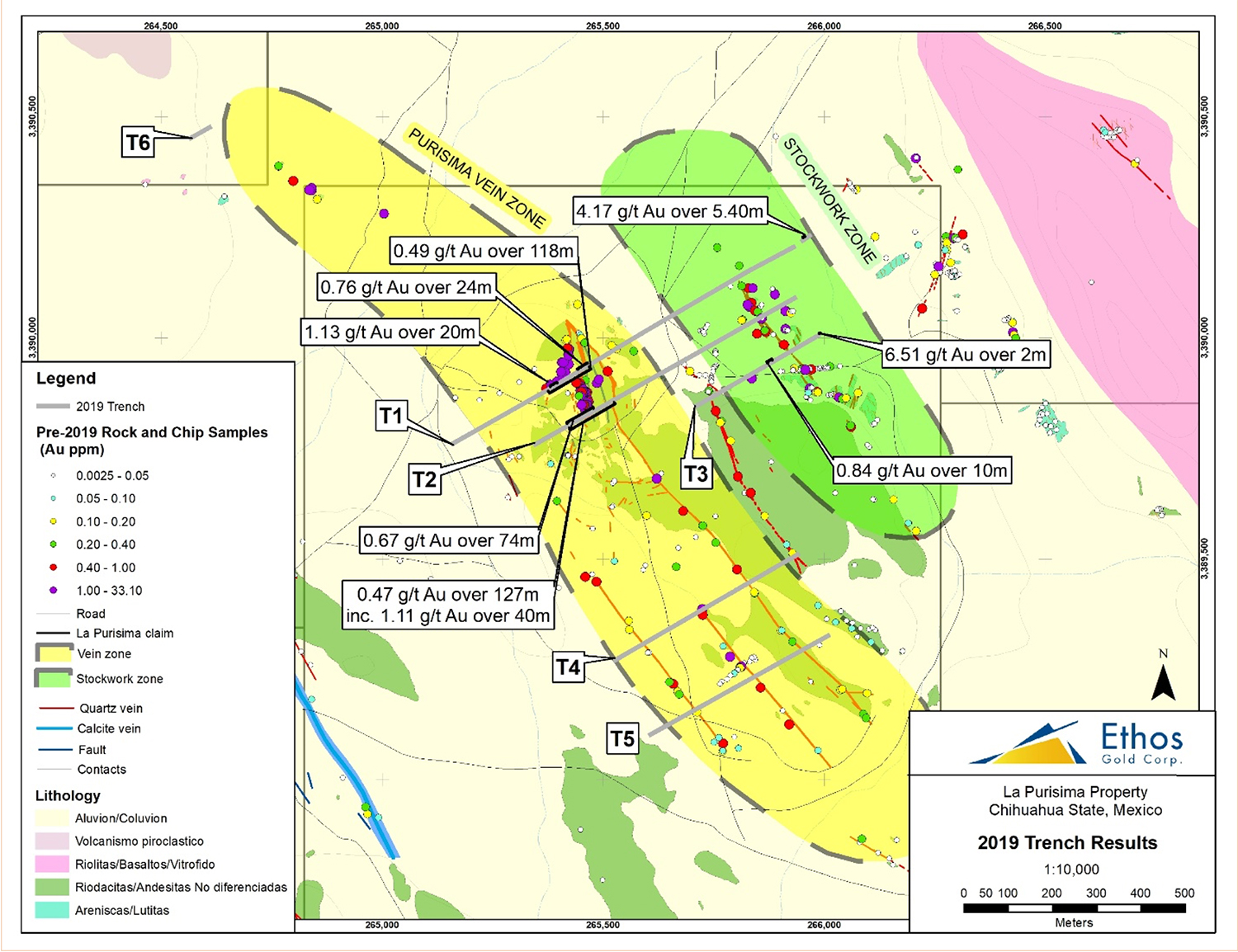 About the La Purisima Gold Project

The exploration model for the La Purisima project is to target near surface, bulk tonnage, oxide gold mineralization. The northwest trending mineralized zone has been identified over a strike length of at least 2 km and with a width of alteration and geochemically anomalous gold mineralization of approximately 600 metres. Within this footprint are two north-west striking zones that have the strongest gold anomalies, each approximately 200 metres wide (see figure above).  One of these zones (the "Purisima Vein Zone") strikes for at least 2 km, and the other (the "Stockwork Zone") strikes for at least 1 km. Both zones appear to extend under the alluvial valley cover consisting of gravel and soil deposits. Gold and silver mineralization is mainly contained in epithermal quartz veins and veinlets forming stockworks and sheets in both volcanic flow rocks and older discordant sedimentary rocks.

La Purisima is located in an area of low, non-mountainous, relief with excellent road access and infrastructure. The concessions are located on private ranch land near active agricultural centers and a long-term annual fee based property access agreement has been signed with the main ranch land owner.

Trenching samples were picked up by the ALS-Chemex sample preparation facility located in Chihuahua, Chihuahua.  ALS-Chemex preparation labwork consisted of splitting and grinding each sample to fine pulp culminates followed by the shipment of 150 grams of this pulp to the ALS-Chemex Vancouver, British Columbia analytical laboratory where gold analysis by 30 gram fire assay with AA finish of dissolved final metal mixture was completed. In addition a second small sample fraction was dissolved in 4-acid mixture and processed for ICP determination of a standard 35-element package. Ethos relied upon ALS Chemex routinely inserted blanks and standards into the sample stream at the assay laboratory. All reported standard and blank assay values, as well as duplicates, were within an acceptable margin of error.

Ethos is also earning into the Pine Pass and Ursula vanadium projects (100% earn-in) in north-central British Columbia. In March 2019 Ethos received notice from the Province of British Columbia that the mineral tenures making up its Pine Pass vanadium project are included in an area under consideration for an immediate moratorium on development proposals and possible inclusion in an expanded environmental protected area, and in light of this notice has suspended work on its vanadium projects.

This press release contains certain "forward-looking statements" within the meaning of Canadian securities legislation, including statements regarding the Company’s planned exploration programs at its La Purisima, Iron Point, and Perk-Rocky projects. Although the Company believes that such statements are reasonable, it can give no assurance that such expectations will prove to be correct. Forward-looking statements are statements that are not historical facts; they are generally, but not always, identified by the words "expects," "plans," "anticipates," "believes," "intends," "estimates," "projects," "aims," "potential," "goal," "objective," "prospective," and similar expressions, or that events or conditions "will," "would," "may," "can," "could" or "should" occur, or are those statements, which, by their nature, refer to future events. The Company cautions that Forward-looking statements are based on the beliefs, estimates and opinions of the Company's management on the date the statements are made and they involve a number of risks and uncertainties. Consequently, there can be no assurances that such statements will prove to be accurate and actual results and future events could differ materially from those anticipated in such statements. Except to the extent required by applicable securities laws and the policies of the TSX Venture Exchange, the Company undertakes no obligation to update these forward-looking statements if management's beliefs, estimates or opinions, or other factors, should change. Factors that could cause future results to differ materially from those anticipated in these forward-looking statements include the risk of accidents and other risks associated with mineral exploration operations, the risk that the Company will encounter unanticipated geological factors, or the possibility that the Company may not be able to secure permitting and other agency or governmental clearances, necessary to carry out the Company's exploration plans, and the risk of political uncertainties and regulatory or legal changes in the jurisdictions where the Company carries on its business that might interfere with the Company's business and prospects. The reader is urged to refer to the Company's reports, publicly available through the Canadian Securities Administrators' System for Electronic Document Analysis and Retrieval (SEDAR) at www.sedar.com for a more complete discussion of such risk factors and their potential effects