The MPD project is accessible year-round via paved highway and situated approximately 40 kilometres from Merritt, British Columbia.  In preparation for upcoming drilling, the Company initiated mapping, prospecting, soil sampling and resampling of historic trenches on the property. Initial work consisted of 93 rock chip samples covering 127 metres of aggregate strike length of reopened historical trenches in the “Man” area of the property.  The Company will use these results to characterize the porphyry system at MPD to guide upcoming drilling.

New assay results from historical trenches are provided in Table 1.  Highlights include:

Claudia Tornquist, President and CEO of Dunnedin said, “Our first results from resampling historic trenches at MPD have confirmed strong mineralization over significant widths at surface, occurring within the preferred porphyritic host rocks.  Results from this field work is extremely encouraging and correlate well with historic results that suggest potential for a large, under-explored mineralized system at MPD. We are excited to expand our efforts to make meaningful discoveries on this project as the year progresses.”

Chris Taylor, Chairman of the Board of Directors of Dunnedin said, “We selected the MPD project because it has key characteristics that could lead to a low-cost new discovery. Mainly, excellent infrastructure access which helps cut costs, over 100 historical drill holes and trenches that define a 10 square kilometre, multi-zoned mineralized system and consolidation of the previously separate Man, Prime and Dillard properties under one umbrella.  As a Dunnedin shareholder, I very much look forward to what our upcoming drill program could bring.”

Upcoming exploration results from the MPD Project include:

In preparation for drilling at MPD, field crews began evaluating historic drill and trench sites on the property in July. As part of this work, surface trenches originally excavated by Newmont Exploration Canada Inc. at the Man prospect in 1980 were resampled by hand trenching (see Figure 1 and 2). The Company collected 93 rock chip samples, 1 to 2 metres in length, from five segments within two historic trenches. Trench resampling totaled 127 metres in the Man prospect area (see Table 1).

*Width represents trench sample length and is not intended to reflect true width. 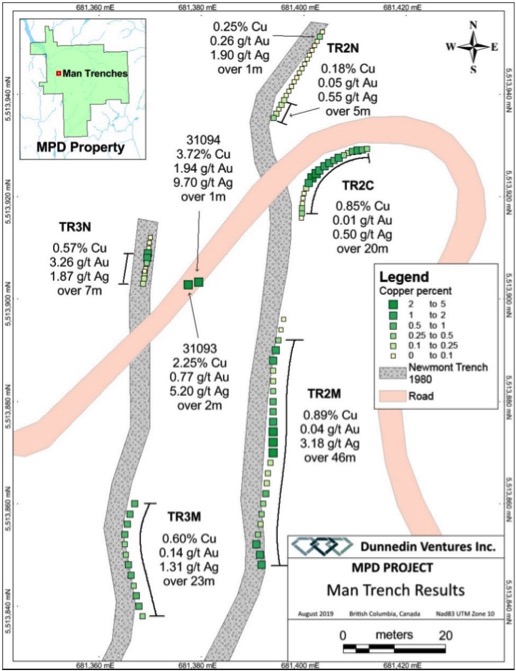 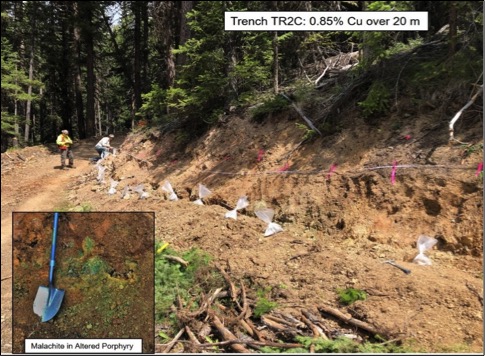 Copper in the Man trenches consists primarily of malachite, azurite and neotocite oxides, usually on fracture/contact/jointing surfaces, or as disseminations and blebs in host rocks. Gold occurs over narrower widths near fault contacts. Mineralization is hosted by a complex assemblage of hydrothermally altered (argillic and sericitic) and unaltered porphyritic syenite-monzodiorite, intruding into lesser amounts of Nicola Group volcano-sedimentary rocks.  Host rocks display fault displacement with sharp contacts and fault gouge, separating blocks of massive to altered variants. Porphyry emplacement within the trench area has been described as either a central stock, or irregular northwest trending dyke-like bodies. Most crosscutting structures similarly strike north to northwest and dip steeply to the east.

The MPD Project’s Nicola Belt geology has many similar characteristics to nearby alkalic porphyry systems at the Copper Mountain Mine to the south, and New Gold’s New Afton Mine to the north. Past exploration has identified numerous copper showings over a large, 10 square kilometre area. Copper and gold mineralization extends from surface, with earlier drilling on the property rarely testing below 200 metres vertical depth. Several historic holes that exceeded 200 metres indicate the potential for porphyry-type mineralization of significant depth and size.

Dunnedin has applied for a multi-year area-based Exploration Permit with the British Columbia Ministry of Energy, Mines and Petroleum Resources requesting authorizations allowing up to 18 drill pads and up to 10 mechanical trenching sites in 2019 and 2020.  Dunnedin’s application is in the final stages of the review process by regulators. The Company expects to commence drilling immediately upon receipt of the permit.

All rock samples were sent to ALS Canada Ltd. (ALS) in North Vancouver, BC for preparation and final analysis. ALS meets all requirements of International Standards ISO/IEC 17025:2005 and ISO 9001:2015 for analytical procedures. Rock samples were analyzed using ALS’s Fire Assay Fusion method (Au-AA24) with an AA finish for gold; and by a 33-element four acid digest ICP-AES analysis (ME-ICP61) with additional analysis for Ore Grade Elements (ME-OG62) and Ore Grade Cu (Cu-OG62). Results were reported in parts per million (ppm) and converted to percent (%) and grams per tonne (g/t). QA/QC includes internal lab standards, duplicates, re-assays, and blanks inserted by ALS. All QA/QC results were within expectations.

Jeff Ward, P.Geo, Vice President Exploration and the Qualified Person as defined by National Instrument 43-101, has reviewed and approved the technical information contained in this release.

On behalf of the Board of Directors
Dunnedin Ventures Inc.
Claudia Tornquist
President & CEO

The advanced-stage Kahuna diamond project in Nunavut hosts a high-grade, near surface inferred diamond resource and numerous kimberlite pipe targets. Dunnedin has title to 809 km2 of mineral tenure, with diamond rights covering 1,664 km2 in Nunavut, 26 kilometres from Rankin Inlet and adjacent to Agnico Eagle’s Meliadine gold mine. Dunnedin’s exploration is aimed at the discovery of diamondiferous kimberlite pipes, working with its advisor and largest shareholder Dr. Chuck Fipke.

Based in Vancouver, Dunnedin is backed by a world-renowned team of exploration experts with decades of combined exploration experience and significant capital market strength. Dunnedin is part of the Discovery Group of companies led by John Robins, one of the most successful mining entrepreneurs in Canada.